The Dala’il Al Khayrat is read across the entire Muslim world. In this post, we’ll look at it’s history and existence in Southeast Asia.

History
The earliest known dated copies of the Dala’il Al Khayrat in the region were produced in the 1730s. However, the Dala’il is believed to have been circulating in the region a century prior to that. There is evidence of Sufism in the region from the 16th century onwards, largely influenced by the teachings of local scholars who had studied in Mecca and Medina.

The education of Hijaz-based scholars included learning the Dala’il Al Khayrat. For instance, the Javanese scholar Muhammad Mahfūz bin ʿAbdillah al-Tarmusī (d. 1920) records that he had learned the Dala'il and received an ijaza from a shaikh at the Mosque of The Prophet ﷺ in Medina. When such scholars returned to their homelands, they often set up religious schools and spread what they had learned abroad locally. It is therefore not surprising to note that the areas where the majority of copies of the Dala'il have been found (Aceh, Patani, Banten, etc.) were also centres of Islamic learning during the eighteenth to early twentieth century.

Devotional practices in Southeast Asia
In Southeast Asia, the recitation of the Dala'il is practiced by various communities across the region. The practices in certain areas have idiosyncrasies that suggest that the rituals have been influenced by local traditions.
(1) It is particularly popular in Aceh, North Sumatra, where it is typically recited by groups of young men on Friday nights or during festivities and ceremonies such as mawlid celebrations and weddings. The recitations are melodious and are accompanied by rhythmic body movements
(2) Among the Minangkabau people of West Sumatra, the Dala’il is closely associated with funeral rites. It is recited by young men on certain days following a person’s death, at the home of the deceased. It was also recited at the graves of saints
(3) In Central and East Java, the reading of the Dala’il is accompanied by a ritual of fasting known as Puasa Dalail Khairat (“The Fasting of the Dala’il Al Khayrat”). This involves fasting for three years (except for certain days during which fasting is forbidden), while reciting the Dala'il daily. The Puasa Dalail Khairat is preceded by a year of Puasa Dalail Qurʾan, whereby the fasting is accompanied by reading one juzʾ of the Qurʾan per day. It is unclear when these fasting traditions began, but they evolved out of a wish to increase one’s concentration when reciting the Dala’il and the Qurʾan

Apart from being a devotional practice, the Dala’il was also popular in times of hardship and war, such as during struggles against non-Muslim forces. Al-Jazuli's (the author of the Dala'il) composition of the text should be seen in the context of the Portuguese incursion into Morocco during the fifteenth century. There are indications that the Dala'il was similarly involved in fights against European powers in Southeast Asia. During the Dutch and the British expansion in the region, some Dala’il manuscripts from Aceh were confiscated by the Dutch from local resistance fighters as war booty.
The presence of the manuscripts among fighters indicates that they were carried on the person. Similarly, during the Java War (1825–1830), the Dala'il was one of the texts used to rally the Javanese troops in their fight against the Dutch. 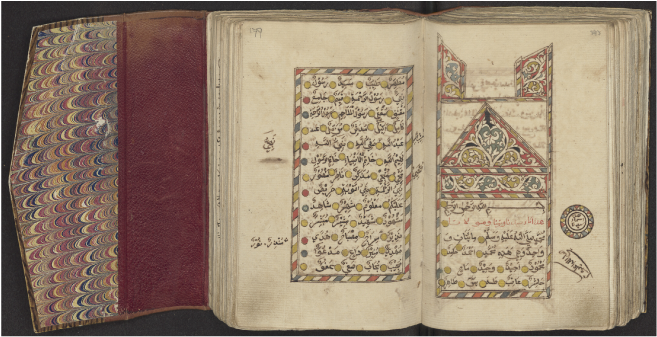 Illumination marking the start of the 201 names of The Prophet ﷺ. Natal, Sumatra, 1814